Windows 10, all the press is raving over it, so I thought I hate it’s flatness, but maybe an increase in performance will win me over? OK time to trial it on a newish machine.

I have a HP Z Book given to me by my employer/institution, my relationship with them is a bit of a grey area which is why I have two desks and two ID cards for the place. This was given to me in early 2015, and is brand spanking new, with crappy Intel HD Graphics 4600, and less crappy Nvidia Quadro K610M graphics chipsets in it. It came with Windows 7, on request, and works fine. For what it is though, a regular 1080p 15 incher, it weighs a tonne, but the battery life is great, lasts for hours on end. I opened it to work out where all the weight was coming from, and it was not obvious, however I was informed that it is heady due to having a steel cage inside it, as it is a ‘business laptop’.  Unfortunately it came with a hard drive and no SSD. I have a spare SSD, so I thought I’ll put that in there too, but it only has two of those mSata/PCIe slots etc. and I was determined not to spend any money on it. The cheapest solution was to buy a cheapo optical drive bay adaptor. Problem solved, but looking at the drive bay, they just wasted space, it would have been so easy to stack two 2.5” drives.

Back to Windows 10, I used a clean hard drive to install a fresh copy. So far so good. I log in, install a few things, get rid of nearly all the live tiles etc. Then I left the machine for a few minutes to do something on my main beast, the mighty desktop PC. When I came back to it, it had gone to sleep so I woke it up. The screen flickered on, then off, a good few times, the hard drive was busy, I waited, waited some more, pressed a few keys, and then, well, this:- 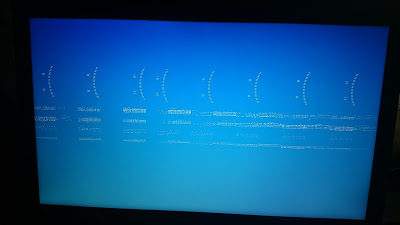 …and it was frozen, no not a screenshot from that overrated movie, this was a good old Amiga style crash, a spectacular where the screen is garbled, though not as many colours, Red and Black Guru Meditations notwithstanding of course.

OK a really bad one off, lets ignore it and carry on. So force a reset, reboot, install Firefox, try some more things, and I cannot help but think of one thing, boy is this ugly, it’s ugly beyond belief, all is flat, there’s no transparency, apart from the task bar where you don’t need it much. I really hate the way this looks. Note how Firefox has gone funny, those are not meant to be black boxes. 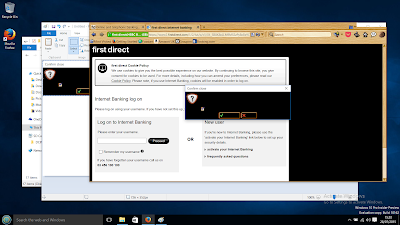 Next I try Cortana, a lot of faffing around and not much done, so I give up on it. Yes I was busy shouting at the mic for it to do things is all that I’m going to say on this. I needed to Skype call someone, great a real world test, let’s install Skype. Oh but it can’t, gives an error about not being able to update ‘the Store’, goes around in a circle i.e. update now, and back here again, I give up and leave it. 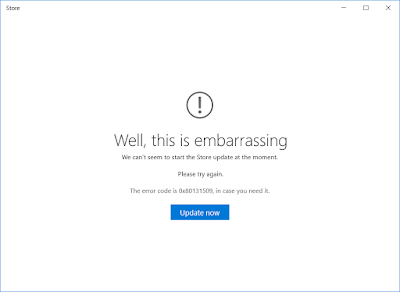 Later, much later, I try to wake it up, same screen flashes etc. and it crashes again, this time it decides to tell me what went wrong:- 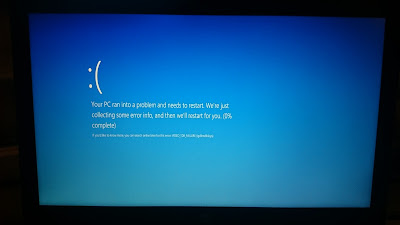 Oh right, same picture as before, but not garbled, this is what it was trying to tell me last time. I should now stop wasting my time and give up, but oh no, I’m in ‘guy in flasher mac who stands in front of a hungry dog fond of sausages when flashing’ mode and decided to look up the problem. Turns out this igdkmd64.sys is an old Windows 8 hangover problem that they’ve managed to bring over to Windows 10. More digging still and it turns out it’s an Intel Graphics driver problem. So go over to Intel, no driver for Windows 10 yet, use Microsoft's, yes the one that crashes, instead.

So that was it, my Windows 10 experience was over, hard drive reformatted to use elsewhere. Oh no why did I try it out in the first place? Oh now I remember, the performance increase I was meant to get. Well it didn’t boot any faster, then again I was using a hard drive instead of an SSD which its Windows 7 usually boots off, but still it was perceptibly slow. All of which is an irrelevance as I sleep my PC and it awakens form it's 5W sleep state quicker than the time it takes me to sit down, or turn the monitor on. I use a master plug which cuts all power to my monitor and amplifier once the PC sleeps, which is why my monitor needs to be turned on, and doesn't just come out of standby.

Yes the file copy dialogue box is interesting, but I’ve been using Teracopy for years, and it does a lot of extra things that even Windows 10’s file copy doesn’t.

I simply haven’t the time to waste on more faffing around with Windows 10, it’s ugly and broken. Windows 7 works just fine for me thanks. Oh I mentioned ‘Frozen’ before, I just can’t help one final reference to it, because it just applies so well here; when it comes to Windows 10, I ‘just let it go!”. Now it becomes obvious why I blog under a pseudonym. Oh as for the two desks thing, I only sit at one of my desks, even if my name is on two doors in the building, because I cannot yet replicate myself so as to occupy both simultaneously. I prefer the company at the one where I sit and feel I would be an undue distraction at the other, where my just walking in one day and saying ‘Hello’ resulted in a good few minutes of laughter. Apparently, it was stated that, I said it in a “1950’s British comedy accent”.